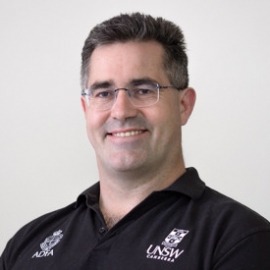 Are you interested in Graduate Research?  Explore some of the PhD Study Opportunities at UNSW Canberra.  We offer a diverse range of Scholarships Opportunities to domestic and international students to suit you and your situation.

Scholarships of $35,000 (AUD) are available for PhD applicants who achieved H1 (High Distinction) in their undergraduate program and/or have completed a Masters by Research.

PhD scholarships ($35,000 per year) are available for high-achieving students (with H1/High Distinction in UG and/or Masters by Research) in theoretical/computational chemistry or relevant sciences under my supervision. If you are interested contact me at t.frankcombe@adfa.edu.au.

Dr Terry Frankcombe is an Associate Professor in the School of Science at UNSW Canberra.

I currently lead a research group investigating a variety of phenomena within physical chemistry, with a focus on the influence of energetics/energy surfaces on dynamical properties. I also collaborate on investigations of dielectric materials, interpreting wave functions and interfacial properties of graphene.

I completed my PhD in 2001 at the University of Queensland, having received a Bachelor of Science with Honours and a University Medal from the Australian National University in 1997. I undertook a series of postdoctoral fellowships at the University of Queensland (2002-2003), Universiteit Leiden (Netherlands, 2004-2006), Göteborgs Universitet (Sweden, 2007, as a Marie Curie Fellow) and the Australian National University (2008-2010), before being awarded an ARC Future Fellowship undertaken at ANU (2011-2014). I also held the position of Associate Director of the National Youth Science Forum (a non-research position) from December 2010 to March 2011.

Having been appointed as a Senior Lecturer in what was then known as PEMS in 2015, I was appointed as Associate Professor at the renamed School of Science in 2019.

My research group is a member group of the QDN - Quantum Dynamics Network.