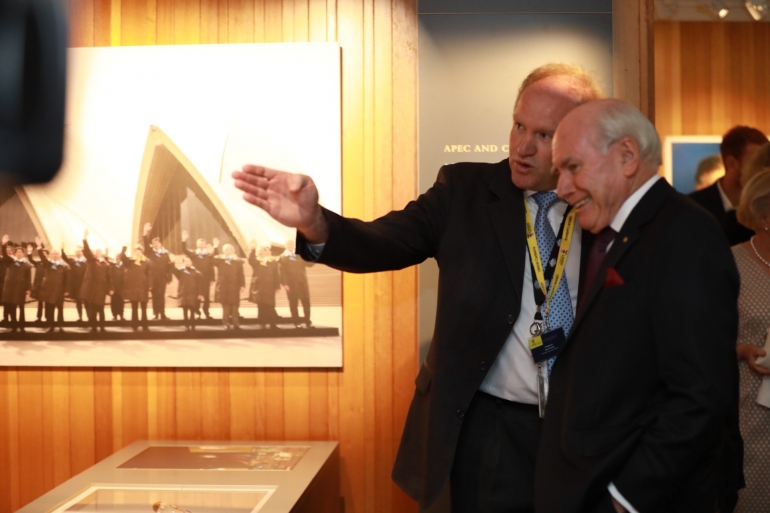 The Howard Library has officially opened at Old Parliament House.

Former Prime Minister John Howard and other members of the Howard family were joined by Prime Minister Scott Morrison at the opening of the prime ministerial library.

Director of the Howard Library, Professor Tom Frame, says the Library – a combination of exhibitions and archives – is the first of its kind for Australia, housing a collection of official papers, personal papers and memorabilia from John Howard’s time as Prime Minister (March 1996-December 2007).

The personal papers and official records total 150 metres of shelf space from Mr Howard’s political career, while the exhibition includes the Prime Minister’s desk, APEC costumes, advertising from both sides of politics and gifts from world leaders.

“A knowledge of both the American presidential library model and familiarity with Australian prime ministerial centres have informed the approach that UNSW Canberra has adopted in establishing the Howard Library,” Professor Frame says.

“What makes this Library unique is its non-partisan and apolitical character. Our objective is to develop the Howard Library as a resource for public leadership studies, how the Howard Government promoted the contest of ideas and publish work that objectively assesses the Coalition’s performance in power.”

Daryl Karp, Director of the Museum of Australian Democracy (MoAD), says the Museum is “delighted to share the spiritual home of Australian democracy, Old Parliament House, with the Howard Library”.

“In this iconic heritage building, MoAD tells the story of Australia’s journey to becoming one of the world’s most vibrant and multicultural democratic nations and the collection housed in the library will help convey that narrative to our visitors.”

Professor Frame says he hopes the library will serve as a prototype for exciting new developments with other Australian prime ministers.

“When we first approached Mr Howard to gauge his support, it was apparent that his attitude and the University’s approach to the initiative were very similar: the need for private papers and public records to be available that shone light on the challenges and questions the government faced between 1996 and 2007 and for researchers and students to make their own judgements about the period,” Professor Frame says.

Mr Howard says the public documents reveal the advice provided to the government, the basis upon which the Cabinet made a particular decision, and why a certain course of action was pursued.

“I fully accept that Australians will have different opinions of my government’s performance and of my leadership, but these views and assessments will be more compelling and persuasive when based on public records as well as media reporting and political commentary,” he says.

The launch will be followed by the third UNSW Canberra Howard Government Retrospective Conference, which focuses on August 2001-September 2004. These years included the collapse of Ansett Airlines the MV Tampa and ‘children overboard’ controversies, the invasions of Afghanistan and Iraq, as well as substantial policy announcements in health and environment.