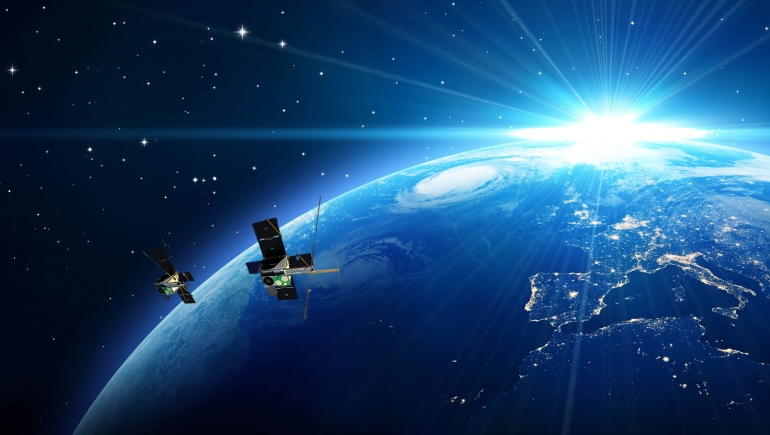 Supporting Australia’s space situational awareness, the data captured by M2 can inform maritime surveillance, weather observations and low-orbit satellite traffic. This information is processed through advanced in-orbit artificial intelligence, on a platform reconfigurable throughout the mission.

“The M2 mission is one of the most complex CubeSat programs ever attempted. It will enable both UNSW Canberra Space and the RAAF to gain experience and capability in the development and operation of in-orbit space science and technology missions,” Professor Boyce said.

The M2 mission will play a role in expanding the Australian space industry, which is integral to solving the challenges the country will face in the future.

“As we depend on space infrastructure for resource management, secure communications and data collection during extreme weather events and bushfires, building our sovereign space capabilities is critical for Australian security,” Professor Boyce said.

“The two satellites will be able to communicate with each other, as well as ground stations back here on Earth, giving better quality data, with greater detail and less lag time – all fundamentally important for Australia’s defence. This innovative home-grown approach has been designed to meet Australia’s unique requirements for sovereign space capability,” Air Vice-Marshal Cath Roberts said.

At home, the mission is supported by a domestic supply chain of some 30 companies. This, combined with three spin-off companies from UNSW Canberra Space to date, is an indicator of the significant impact that targeted investment in the research sector can have on building the nation’s space industry.

“The M2 mission is our most complex yet and it’s great to be launching again with Rocket Lab,” Mr Tomaschett said.

“M2 comprises two connected spacecraft that will separate on-orbit to engage in formation flying, followed by a multitude of radio frequency, imaging and laser experiments.”

It follows in the footsteps of the M2 Pathfinder Mission, which launched with Rocket Lab in June 2020 and delivered various risk mitigation exercises for the team’s technologies ahead of the launch of M2.