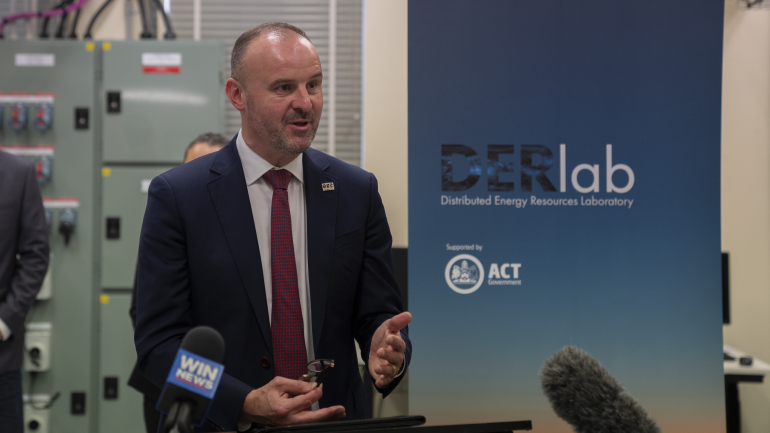 UNSW Canberra has proudly partnered with the new Distributed Energy Resources (DER) Lab, which opened at The Australian National University (ANU) this month.

The DER Lab will be used by tertiary institutions and private industry alike, and solidifies Canberra’s standing as a national leader in renewable energy advancement in Australia.

Associate Professor Hemanshu Pota is taking the lead on UNSW Canberra’s contributions to this important pursuit of sustainable technologies.

In particular, A/Prof. Pota is focussed on the creation of controlling and monitoring capabilities for a renewables-enabled electricity grid.

“[We will] provide a powerful control platform for both centralised and decentralised control functions very similar to what happens in microgrids or small active distribution power networks.”

A/Prof. Pota explained that integration of different components of a renewable energy grid is the key to the success of wide adoption of sustainable power around Australia.

“Control is key to the stable operation, both during the normal and faulted operation. With proper control the system can recover quickly when abnormal conditions occur and enable minimum cost during normal operation.”

A/Prof. Pota noted that to date, there has been a lack of accurate data and modelling to assist planning and policymaking in this area.

With UNSW Canberra’s contributions, the DER Lab will be able to collate accurate data around usage and demand conditions on the energy grid where multiple renewable technologies are combined.

“The DER Lab will encourage the development and experimentation of novel generation and operation technologies that will make the existing active distribution power networks more reliable and the cost of electricity for the consumers cheaper,” said A/Prof. Pota.

PhD students also need a place to validate their work in near-realistic conditions – this facility will contribute to teaching and education pursuits in this way, supporting future renewables engineers and policymakers to lead the adoption of sustainable energy.

"Supported through a $1.5 million Priority Investment Program grant in 2019, the DER Laboratory is an Australian first, delivered in partnership between the ANU, UNSW Canberra, IT Power and Evoenergy. It builds on the significant investments that industry and the ACT Government have already made to grow Canberra's renewable energy sector.

"The facility will unlock new opportunities around renewable energy capability that will ultimately translate into new investments, economic growth, lower energy bills and new jobs for Canberrans," he said.