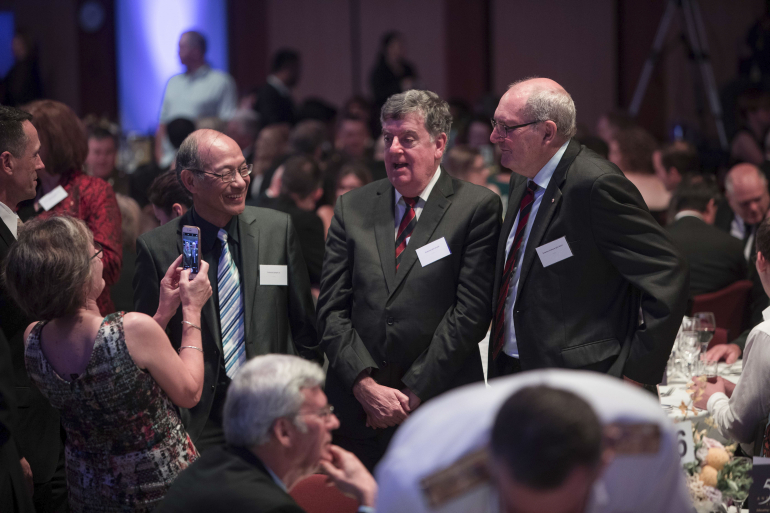 The University of New South Wales Canberra celebrated its 50th anniversary on Friday night with a spectacular event at Parliament House.

About 600 people attended the anniversary dinner, including alumni, past and present staff and the ACT Chief Minister, Andrew Barr.

The anniversary year began in July when the university marked the signing of the 1967 agreement between UNSW and Defence to provide tertiary education to military cadets.

Speakers included UNSW President and Vice-Chancellor Professor Ian Jacobs, who highlighted how the university has adapted with the times. “Our students in 1968 were studying against the backdrop of the Vietnam War, an era of field telephones and paper maps,” Professor Ian Jacobs said.

“Today they must be across areas as diverse as cyber security, space, systems engineering, logistics and public sector management and conflict studies.”

UNSW Canberra alumnus David Michel spoke fondly of his university memories, while Vice Chief of the Defence Force Vice Admiral Ray Griggs explained the importance of the 50-year partnership and its contribution to Australia’s Defence capability.

On a day that also marked the launch of the UNSW Defence Research Institute at the Canberra campus, UNSW Canberra Rector Professor Michael Frater discussed how the university strives to push boundaries and invest in ground-breaking research.

“It’s amazing what has come from an arrangement in 1967 that was never meant to last more than a decade,” he said.

“We have forged an important place in the world. Our relationship with alumni, faculty and, with Defence, and the broader community means we can continue to push boundaries.”

As UNSW Canberra continues its talks with the ACT Government to expand the university with a new city campus, the event was as much a celebration of what there is to look forward to as it was a reflection of the past.

“There will be challenges and great opportunities ahead – and as we’ve done before – we will meet them with boldness and perseverance,” Professor Frater said.