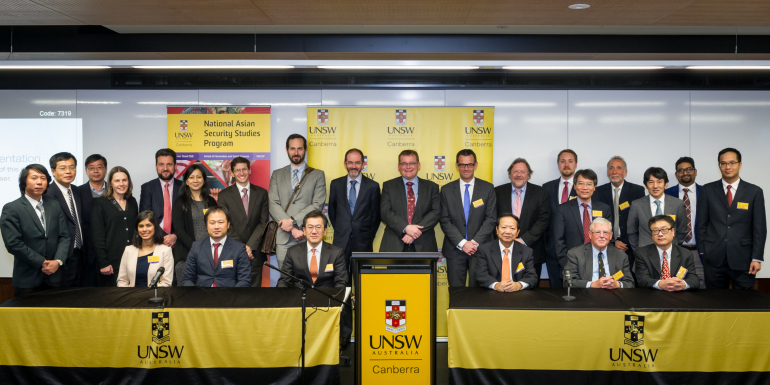 On September 29-30, UNSW Canberra at the ADFA hosted the International conference ‘The South China Sea in the Broader Maritime Security of the Indo-Pacific’, together with subsequent workshops.

Videos of the conference sessions are available here https://www.youtube.com/playlist?list=PLLY36E3-1930wjzuzy3SekQDzA3emdP6B

The event was co-hosted by the Diplomatic Academy of Vietnam (DAV) and the Japan Institute for International Affairs (JIIA). The conference was attended by close to 100 participants – including 30 international and interstate role players (chairs, speakers and discussants) – as well as Canberra-based embassies, senior officers from the Australian Defence Force, officials from relevant governmental and non-governmental agencies, and academics.

The context of the event was based on the South China Sea being the centre of maritime disputes in the Indo-Pacific region. In this regard, many states have significant maritime security interests in the area, including freedom of navigation and overflight, peace and security, and respect for international laws and norms. Based on subsequent feedback, the conference was interpreted by many participants as a successful and thought provoking event.

Associate Professor Christopher Roberts, UNSW Canberra, stated that “during the past decade, maritime disputes have escalated to the point where the regional order is being affected and the risk of subsequent armed conflict cannot be entirely ruled out.” He added that, however, ‘too little analysis has considered the domestic and economic connections to these security interests. For example, how might further stagnation in China’s economy, or even increased resistance to the rule of the Chinese Communist Party (CCP), affect Beijing’s behaviour in the South China Sea? Might Beijing become more assertive or even aggressive if this helps to galvanise domestic support for the CCP?”.

More broadly, if the broader international economy deteriorates beyond its current point, how will that affect the foreign policies of the claimant states, ASEAN, middle powers such as Australia, and other major powers such as India, Japan and the United States? Aside from various panels that addressed these challenges, both the conference and the subsequent workshops addressed, among many matters, how Australia’s economy would be affected when Australia and other regional governments might be forced to more strongly defend the sovereign and economic rights of other countries.