The Singapore spectacle: more of the same? 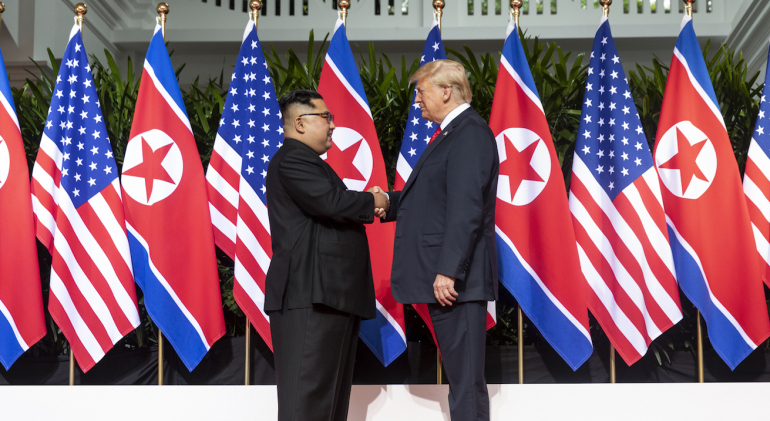 On Tuesday, North Korea committed to denuclearisation for the third or fourth time in the past 25 years. For now, the Singapore summit looks like a lost opportunity and could even prove a disaster.

In Singapore, the North Koreans have again committed themselves to denuclearisation. Depending how it is counted, this is the third or fourth time they have done so in the past 25 years. Meanwhile, they have gone from a country possessing a single small nuclear reactor of an obsolescent type to a nuclear power armed, so they have claimed, with an operational ICBM capability. That trajectory is grounds enough for scepticism that this declaration will result in any consequences different from its previous iterations. The tone of most expert commentary has been understandably critical.

There are no specific commitments in the arrangement, and Trump’s presence offered an imprimatur to the North Korean leadership that would better have followed rather than preceded actual steps towards compliance. Moreover, Trump’s announcement that large-scale war exercises would be suspended – he seems to believe that the key issue is their cost rather than their role in deterrence and military preparedness – was a major and so far unwarranted concession. North Korea’s decision to render inoperative some obsolete facilities was hardly a matching response. Trump should at least have extracted a promise from Pyongyang to stand down some of its advance deployed heavy artillery and rockets.

What are the effects, then, of the four-point agreement signed with great fanfare in Singapore by President Trump and Chairman Kim Jong-un?

First, the US commits to developing a completely new relationship with Pyongyang. The parties have undertaken to initiate an era of ‘new relations’ in order to achieve ‘a lasting and stable peace regime’. This would have to mean that at some point the US will be required to recognise North Korea diplomatically. Pyongyang will certainly expect a comprehensive peace treaty. Trump could well grant such a treaty, but its existence would unravel the current armistice arrangements, including the status of the forces at the demilitarised zone and of the UN Command (in which, by the way, Australia is a ghostly presence). In the run-up to such a treaty, of course, North Korea will expect to have removed all those American sanctions that currently apply to its banking and finance sector, its trade, and the movement of its personnel.

Second, the American president has given his imprimatur to a document that states that he finds it acceptable and satisfactory that North Korea is willing to ‘work toward complete denuclearization of the Korean Peninsula.’ Quite what the end result might be is unspecified, and the timing is indefinite. This opens the way to potentially endless discussions in order to find a mutually acceptable definition.

The perennial American formula of CVID (complete, verifiable, irreversible denuclearisation) is absent. It is also highly noteworthy that the phrase ‘the Korean peninsula’ is used. The writ of North Korea does not run south of the 38th parallel, but Trump is committing to an outcome that pertains also to South Korea. What exactly the US and South Korea will have to do to satisfy this requirement gives scope for many interesting discussions, probably even including the character of the current alliance. Here the North Koreans are building upon the extraordinarily open-ended agreement conceded by President Moon Jae-in which, in announcing that both sides would repudiate confrontation, could also be parsed as an undertaking to end that alliance.

These two main points are not related in a specified serial order. This means that it is quite open to negotiation as to whether they should be realised simultaneously, in full or step-by-step. The North Koreans are more practised than any other party in the art of salami slicing and their skills will now be on display.

Trump in his press conference was quite definite that sanctions remained, but it is hard to see now how that regime can be maintained. The North Koreans will certainly ask for the relaxation of sanctions, and probably sooner rather than later. A sanctions regime is only as good as its degree of international support and even before the Singapore summit China began to relax its hitherto relatively stringent policies, to the point of announcing a resumption of airline flights to Pyongyang. Enabling renewed North Korean financial dealings in China cannot be far behind.

The greatest puzzle, however, relates to the many meetings that occurred ahead of the summit. The United States scrambled to find the expertise necessary, including diverting the current ambassador to Manila to the task. Mike Pompeo made two trips to Pyongyang, there were multiple meetings of senior staff, in both New York and Panmunjom, and Kim Yong-chol came to Washington. The North Koreans, of course, have been conducting these same negotiations since 1993, and some of the same personnel are still responsible. We have no sense, however, of how much, if any, progress was made in these exchanges. There was certainly none apparent in the Singapore text.

Nonetheless, the two sides must have some sense of what they are about. All we can say currently is that they apparently are not confident enough to commit to any public formula. This is not a good beginning. In short, the Singapore summit looks – for now – like a lost opportunity and could even prove a disaster. However, more detail from both sides is needed for a definitive judgement to be possible.

Emeritus Professor James Cotton FAIIA is a professor at University of New South Wales Canberra, Australian Defence Force Academy. In 2013, he was recognised as a Fellow of the Australian Institute of International Affairs. He will be speaking at AIIA ACT Branch with Associate Professor Brendan Taylor on ‘Reflections on the Trump-Kim Summit’ on 19 June. You can register here.