Next generation drones could learn from bumblebees’ amazing flight 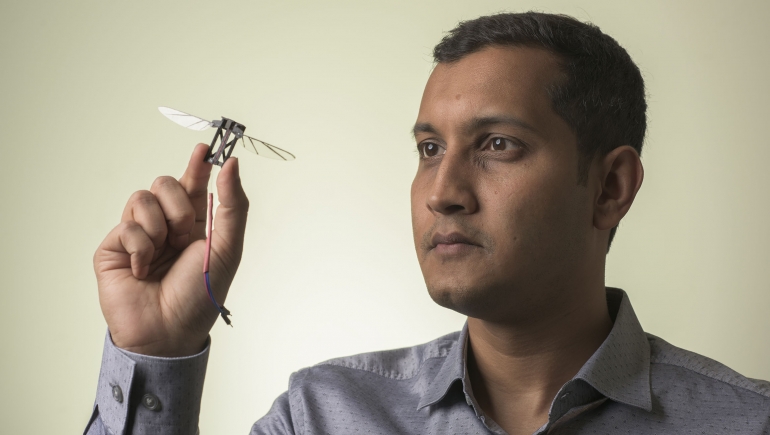 An international study, led by researchers from UNSW Canberra, has discovered the secret of bumblebees’ self-aware dexterous flight, that could have applications for the next generation of drones and autonomous vehicles.

Research lead author, Dr Sridhar Ravi from UNSW Canberra, studied how bumblebees navigated through a tunnel with a series of gates featuring different sized holes. The bees were able to successfully fly through the apertures, thanks to a remarkable sense of their own size and a detailed perception of the obstacles’ openings.

Dr Ravi said that by scanning the aperture, bumblebees were able to skilfully fit through the gates by manipulating the speed of their approach and posture, even flying sideways when the hole was smaller than their wingspan. A behaviour that required an awareness of their body shape and dimensions relative to those of the obstacles, the first time such evidence has been seen in flying invertebrates.

“Previous research had indicated that complex processes, such as the perception of self-size, were cognitively driven and present only in animals with large brains. However, our research indicates that small insects, with an even smaller brain, can comprehend their body size and use that information while flying in a complex environment,” Dr Ravi said.

Using ‘lateral peering’, a process where the bee scans a feature, using depth perception and spatial awareness, the insects build a comprehensive map of the aperture and can change their body orientation to fit through the gap, similar to how humans rotate their shoulders to fit through a narrow doorway.

“We were amazed to see that in some instances, the bumblebees reorientated themselves sideways to fly through gaps they were unable to attempt head-on. The dexterity of these insects has really got us thinking about what other secret bee behaviours we could unlock,” Dr Ravi said.

The research also provides inspiration to apply the bumblebees’ attributes to robotics with potential applications for the next generation of drones and autonomous vehicle technology to deal with the challenges of flying in real-world conditions.

“Insects are fantastic models for robots because they have exceedingly small brains and yet they're able to perform overly complex tasks. Over thousands of years nature has coded insects with some amazing attributes. Our challenge now is to see how we can take this and apply a similar coding to future robotic systems, enhancing their performance in the natural world,” Dr Ravi said.

The research, published in Proceedings of the National Academy of Sciences of the United States of America (PNAS), is a collaboration between researchers at UNSW Canberra, Bielefeld University, The Max Planck Institute, Brown University and The University of California.