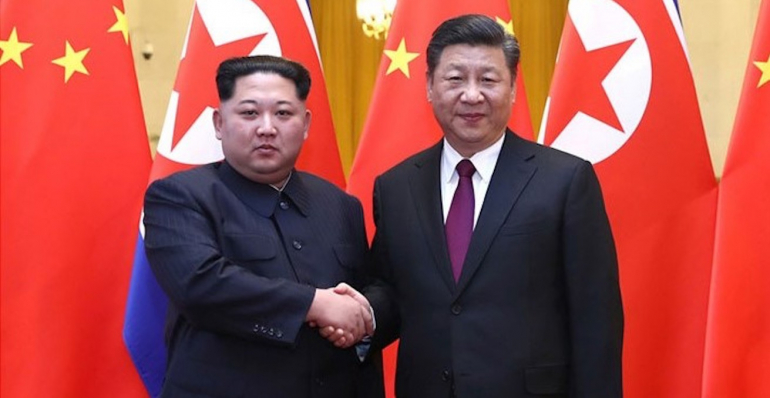 When the North Korean leadership train rolled into China on 25 March, the world stopped in its tracks. Did the visit signal a derailing of American primacy in the region?

There had been no announcement of the trip when Kim Jong-un visited Beijing. This practice is not unusual, Kim Jong-il had been highly secretive in his trips to China. But in its absence the only clues as to its import must be gleaned from the interpretation of the terminology adopted by both sides. Boilerplate phrases abounded, but enough was revealed to suggest that Xi Jinping had summoned Kim and was not pleased with the circumstances that made the visit necessary.

Kim Jong-un used the occasion of the meeting of the National Peoples’ Assembly—and its affirmation of the authoritative status of President-for-life Xi Jinping’s ‘thought’—as the reason for his personal call. As he stated, “it is my obligation to come to congratulate Xi in person, in line with the Democratic Peoples Republic of Korea (DPRK)-China friendly tradition.” Kim, therefore, was the supplicant.

For his part, Xi’s key remarks were as follows:

Traditional China-DPRK friendship should be passed on continuously and developed better. This is a strategic choice and the only right choice both sides have made based on history and reality, the international and regional structure and the general situation of China-DPRK ties. This should not and will not change because of any single event at a particular time.

So, Trump summit or not, there will be no variation in China’s role as security guarantor for the DPRK, and the North Korean side had better make no undertakings that will compromise China’s traditional role.

In the four principles Xi then announced as applicable to DPRK-China relations in the current stage, he said there should be high-level contacts and frequent leadership communication. He also said that China was “ready to make joint efforts with the DPRK side, conform to the trend of the times, hold high the banner of peace, development, cooperation and mutual benefit, continuously improve the wellbeing of the two peoples, and make positive contribution to regional peace, stability and development.”

In other words, there have been no contacts worth having since Kim Jong-un has come to power and this should change. Neither has there been any cooperation worth mentioning on development or the improvement of popular wellbeing (the latter term being one that appeared a number of times in the public remarks passed during the Beijing visit). In short, the North Korean comrades have neglected their fraternal duties, and their own people have suffered, neither have they learned from China’s rich experience. This situation also had better change.

For his part, Kim Jong-un had little to offer. Privately he might have advised Xi on the practice of unlimited leadership tenure—the one area of party experience where the DPRK is ahead of China (at least as yet)—but the one point he had to address was the nuclear issue. The formula he adopted is one that has been heard before, specifically, “it is our consistent stand to be committed to denuclearisation on the peninsula”. How this position squares with the DPRK claim, enshrined in its constitution of 2012 and often repeated, that it is a “nuclear-armed state” was not explained.

In suggesting the possibility of a summit with the US, the formula “progressive and synchronous measures for the realisation of peace” was adopted. It should be recalled that denuclearisation has been the avowed objective of the DPRK since 1992 (when it concluded a comprehensive denuclearisation agreement with the Republic of Korea) even while it has single-mindedly devoted almost three decades to its missile and nuclear programs. However, progressive and synchronous measures—again a familiar formula—to be agreed with the US could include the substitution of the current armistice on the peninsula for a peace agreement, the winding up of the UN Security Command in Korea, the abrogation of the US treaty arrangements with Seoul, and withdrawal of US forces from South Korean bases. The DPRK may even have in mind some (perhaps symbolic) US pull-back from Japan.

Incoming National Security Adviser John Bolton is on record, in a recent interview, rejecting the possibility of a peace treaty. The American negotiating position is far from clear, but if the CVID (complete, verifiable, irreversible, denuclearisation) objective affirmed by the Bush administration is again pursued, the obstacles to its realisation (if indeed it could ever be achieved) are many.

In some respects, Kim Jong-un has already scored a diplomatic triumph by extracting an agreement to meet from President Trump. This development permits him to portray himself as the equal of the leader of a great power, who, in seeking negotiations, must bring to the table some package of proposals of advantage to the DPRK.

Meanwhile, Kim met with a group of K-Pop performers who had been invited to Pyongyang to stage a concert on 1 April. He was clearly preparing the ground for his upcoming meeting with South Korean President Moon Jae-in  scheduled for 27 April.

In the long game that is the DPRK nuclear program, some weakening of sanctions in exchange for a moratorium on testing (or perhaps building) missiles would be a win for Pyongyang. The Trump administration has almost reached the halfway point, and the North Koreans have experienced sufficient policy flux in Washington to know (or at least hope) that better times may be ahead. At the very least, they might hope for some relaxation of sanctions from Beijing (or Seoul) as a reward for taking the diplomatic path. They have been reminded, however, that China’s interests are paramount and cannot be ignored. It is now up to Xi Jinping to deliver the bold foreign policy about which he has often spoken but as yet failed to deliver.

The inscrutable player in the coming drama is, regrettably, the United States. It is to be hoped that President Trump will be able to take time off from conducting his trade war (most recently disputes have arisen with South Korea, even following the ostensibly successful renegotiation of the South Korea-US free trade agreement) to focus on dealing with Kim Jong-un. At least we can be glad that Kim does not tweet.