Issues that swung elections: Petrol shortages and the dawn of the Menzies era 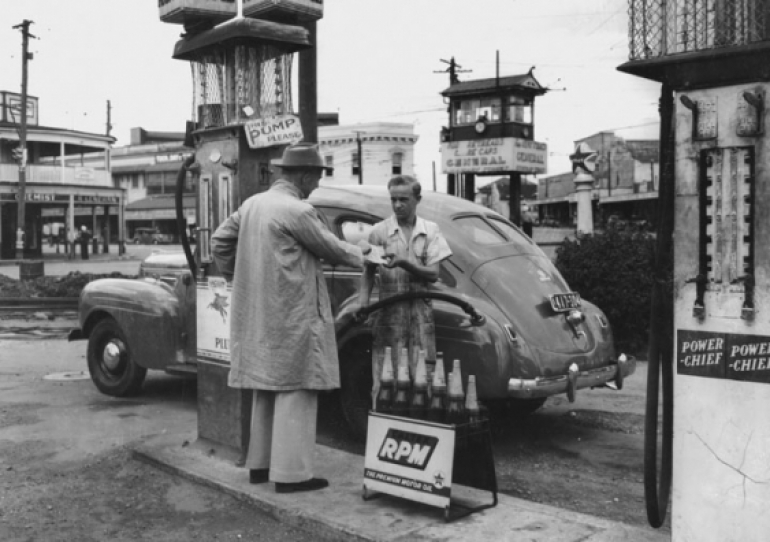 In the 1949 federal election, a Liberal-Country Party Coalition led by Robert Menzies defeated the Australian Labor Party, ending Ben Chifley’s four years as prime minister. Menzies also dashed expectations that Labor had established itself as the “natural party of government” following decisive victories in 1943 and 1946.

Prior to the 1949 election, Labor had led Australia successfully through the second world war. The popular mood was solidly behind its agenda of full employment and social welfare.

The Chifley government only began to encounter troubled waters in 1947. Its bid to nationalise the private trading banks swung popular opinion behind the Liberal Party. But after the High Court’s invalidation of bank nationalisation, the fortunes of the Labor Party revived. A Gallup poll in April 1949 showed a narrow lead for Labor and presaged a tight contest at the end of the year.

Historians have tended to attribute Menzies’ eventual victory to issues like bank nationalisation and the differences between the major parties over how to handle the Australian Communist Party. While these were undoubtedly factors in the election, the decisive issue was something else: petrol rationing.

Petrol rationing and the ‘sterling area’

In the 1940s, Australia was a loyal member of the British Commonwealth, as well as of a monetary and trading group known as the “sterling area”. Australia and other members of the group pooled their external reserves in London and rationed “hard currencies” like the American dollar. The sterling area was a system that helped British Commonwealth countries get through the second world war.

After the war, Australia continued to import most of its goods from Britain, with the exception of essential items such as petrol and news print. Petroleum, sourced overwhelmingly from US producers, could only be purchased with dollars. But Australians could not secure enough dollars to meet all their petrol needs. This meant that Canberra had to go to the British Treasury every year to ask for extra dollars – a situation that soon became unsustainable.

Britain was virtually bankrupted by the second world war. In an effort to avert a financial crisis, British leaders convened a meeting of Commonwealth finance ministers in July 1949 and asked the group to impose restrictions on dollar imports for the common good.

To meet the British government’s request, Chifley had to overcome a major hurdle: the High Court’s invalidation of federal petrol rationing regulations. Menzies himself had introduced the rations as a wartime measure in 1940. But in June 1949, the High Court ruled that the rationing of petrol could no longer be justified in peacetime. To work around the court ruling, Chifley had to secure the agreement of the states. Once he did, petrol rationing was again in force across the country.

But by that time, Australians were hooked on petrol. In 1949, about one in every 10 Australians had a car in the garage. When rationing came back into effect, it sparked a national crisis. Motorists suddenly found it harder to fuel up than at any time during the war.

The 1949 election and its consequences

Following an electoral redistribution in 1948, the size of the House of Representatives had increased from 74 to 121 seats. A September 1949 Gallup poll estimated the Chifley government still had enough electoral fat to withstand a 3% swing against it in the enlarged House.

It was not enough. In the campaign speeches in November 1949, the Chifley government stood on its record. Menzies, meanwhile, pledged to do away with petrol rationing, in part by drawing on defence oil reserves held in Australia.

A Liberal Party campaign ad in the 1949 federal election campaign.

This bold, some might say reckless, move by Menzies was precipitated by Arthur Fadden, leader of the Country Party, who had earlier promised in his own campaign speech to eliminate petrol rationing. Fadden would later write:

I am inclined to think that petrol rationing was the rock on which the government finally foundered.

Opinion polls taken after the election confirmed Fadden’s assessment. The Coalition swung 6.61% of the popular vote to its side. Of the voters who switched allegiances, 60% said they considered petrol rationing when casting their votes. At the election on December 10, Menzies’ Coalition won 74 seats to the ALP’s 47 – a sizeable majority.

After the Coalition victory, Menzies followed through on his campaign promise and brought an end to petrol rationing. And the economy began to look up. The Korean War ushered in a boom in the early 1950s. A massive increase in Australian wool exports, as well as other raw materials from British Commonwealth countries, helped bring about a revival in the fortunes of the sterling area.

So, the gamble by Menzies and Fadden on petrol rationing proved lucky. Far from confirming the ALP as the “natural party of government”, as would be the case in New South Wales from 1941 to 1965, the 1949 election actually began a period of more than two decades of Liberal-Country Party rule.