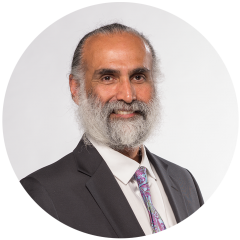 Professor Harvinder Sidhu is the Acting Rector of and a Professor at UNSW Canberra at ADFA. Prof Sidhu has authored more than 190 research articles, predominantly in the field of Applied and Industrial Mathematics.

He has received numerous competitive grants and several awards for his excellence in research and teaching. These include the J.H. Michell Medal from the Australian and New Zealand Industrial and Applied Mathematics division of the Australian Mathematical Society, as well as the UNSW Canberra Rector’s Award for Teaching Excellence.

When fulfilling the Deputy Rector role, Prof Sidhu was also Research Leader of the Applied and Industrial Mathematics (AIM) Group in the School of Science.

His previous leadership roles at UNSW Canberra at ADFA include Associate Dean (Education) and Deputy Head (Education) of the School of Science.

Before becoming an academic, Prof Sidhu taught in a high school in Singapore.